My boyfriend runs a campaign for just the two of us. He’s got me running 3 characters, each of which seemingly had their own storyline and partner or party DMPC(s). He’s woven such an awesome story over the past year now and I can finally see a convergence happening in the near future… This whole thing is glorious, and I’m just so blown away by his storytelling.

I’m working on to starting my own campaign with him and my “Canadian dad”… And as a thank-you for all he’s done (and the times he made me cry by killing my Ranger’s brother or stranding my Bard on an island in the middle of what I thought was going to be payoff for her main arch), I ordered some killer metal dice from SkullSplitter.

Now, in my efforts to keep them in good condition and avoid the crazy loudness of rolling metal dice on a wood table, I scoured the interwebs for a good, lined dice tray… But couldn’t find anything cheap, or justifiably pricey (read: special and unique).

Sooooo rather than drop a metric tonne of coin on Elderwood, I made my own. Spent a reasonable amount at Michaels, had a bunch of fun (despite utter inexperience) and am quite pleased with the outcome. 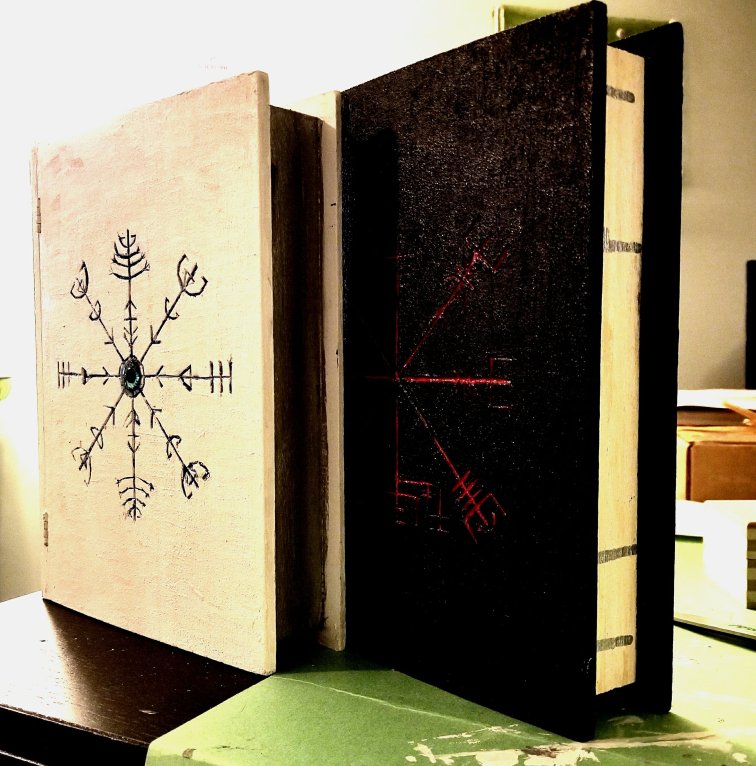 Bonus: my cat will have a harder time stealing our dice.

Tempted to build a whole set to go with each of our characters, but I’m happy with these two for now. His black+red goes great with the Butcher’s Bill set (gunmetal grey dice with red numbers) and the white+blue compliments my Icy Doom set (shiny nickel with blue numbers).

I carved the Norse symbol of Fate (wyrm of wyrd) into the spine.

For the black book, I carved the Vegvisir Galdrastafir (Norse charm for guidance through rough weather). For the white book, I chose Veldismagn (to give strength and power).

Admittedly, I wish I’d have switched the two, since I had my Sea Sorceress in mind for the white one.

I used a nail file to sand since neither of the two Michaels locations had any gods damned sandpaper. Oh well.

you there! what day is it?

times i actually wrote something

damsel with a magnum